Connectivity NOW: Network on Wheels proves its worth

By: Darren Mills | The nbn™ project | Published on 24 June 2020
Share on Twitter Share on Facebook Share on LinkedIn
5-minute read
When a bushfire seriously damaged a local exchange housing nbn™ equipment, we turned to a Network on Wheels to help keep our customers connected.

It will come as no surprise that during emergency events and natural disasters Australia’s infrastructure can suffer minor and major damage or, in the worst-case scenario, be destroyed.

Everyday activities – like driving to and from work, cooking dinner and using the internet – can all be affected, depending on which critical network has taken the hit.

Such was the case in Diamond Beach, New South Wales, during the recent bushfire season when the local telecommunications exchange was severely damaged by fire.

Among the equipment inside was the Diamond Beach Fibre Access Node (FAN), which forms part of the nbn™ network. 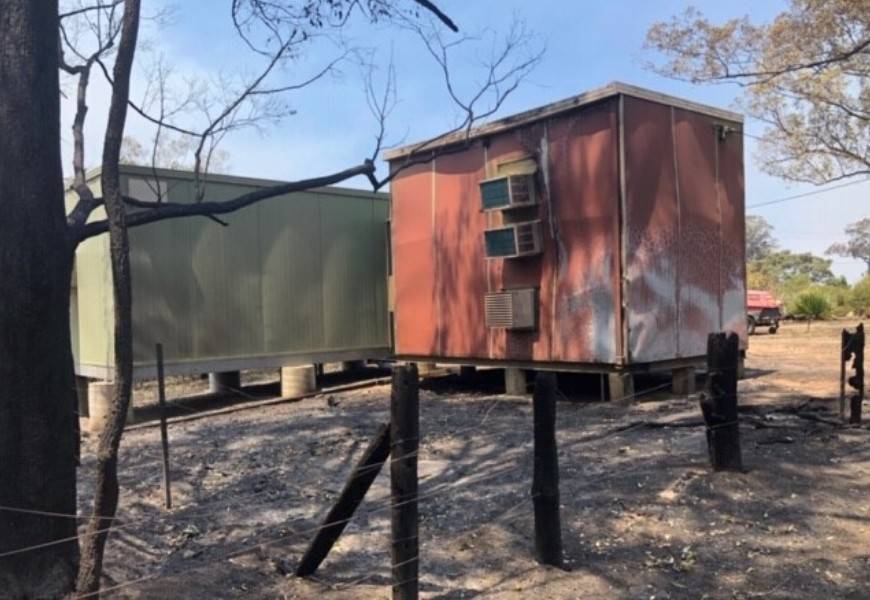 Flames licked right up to the exchange’s door where the intensity of the heat caused its metal walls to warp, creating gaps between the sides and ceiling, and giving smoke and heat easy access.

Choking the equipment and coating it in soot and ash, the fans and air intakes soon found themselves blocked, causing our hardware to fail.

As a result, more than 3,000 customers lost their connectivity to the nbn™ network.

So, to help restore services and keep these customers connected while the exchange and FAN were being repaired, nbn deployed its first Network on Wheels.

What is a Network on Wheels?

Designed and built by nbn, a Network on Wheels helps to temporarily ‘plug a gap’ in our fibre network when it’s impacted by events including cyclone, flood and fire.

Also known as a ‘NOW’, the equipment-packed trailer can be towed to where it’s needed to replicate a small Fibre Access Node site, a central point of connectivity for all customers in the area irrespective of which technology they are using.

The FAN site then transmits these aggregated connections to the nearest Point of Interconnect (POI) – the connection point where phone and internet providers connect to the nbn™ network. In this case, the POI is in Coffs Harbour.

Thanks to four hard points on the trailer’s frame, it can also be lowered into position by crane or helicopter for those difficult-to-access locations.

Since being deployed to Diamond Beach in November last year, the NOW has helped to keep those 3,000 customers connected to the nbn™ network, while allowing the time needed to rebuild.

The structural damage to the exchange was considerable, leaving the site dangerous to access let alone to install and replace the equipment inside.

While six months may seem like a long time to repair the damage, it’s a painstaking and complex process, says Tyler Armstrong from nbn’s Network Emergency Management team.

It extended beyond the normal network restoration work carried out by the team and required close collaboration across the business. 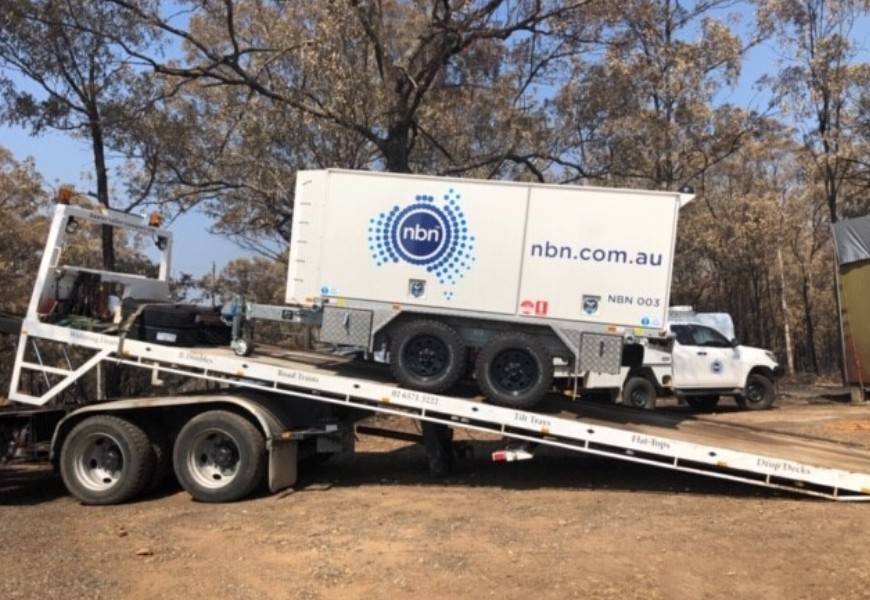 “Replacing damaged or failed equipment is a common practice for our Network Assurance teams,” says Tyler.

“But rebuilding and recovering an entire FAN site after such extensive damage is a much bigger exercise and meant we had to work and think differently.”

Collaboration, both within nbn and with the exchange’s owner, was essential to getting the job done as quickly and efficiently as possible.

“We had to coordinate extra ordinary activities in time with the exchange owner’s structural rebuild, deploying security fencing and stripping the site bare to allow the building’s interior to be professionally cleaned.

“The FAN site provided connectivity to customers spread across four different access technologies – Fibre-to-the-Node/Building, Fibre-to-the-Premises, Fibre-to-the-Curb and Fixed Wireless – and the repair and rebuild activities were coordinated across each to get the network back up and running.”

Complexity and the cutover

The complexity of the restoration was most notable in the logistical requests for replacement parts.

“I haven’t done the maths, but we must have ordered around 400 replacement parts from Logistics,” says Tyler.

“Wanting to reduce the freighting costs for such a sizable order meant close collaboration between our Operate & Maintain Network, Supply Planning and Supply Operations teams.

“Parts were sourced tactically from right across the country and collated in NSW for bulk shipment to the site.

“There was so much gear, we had to make sure there was a forklift available at the other end to get it all off the back of a flatbed truck.”

Preparation and meticulous planning were key to ensuring the complex cutover – switching from the NOW back to the repaired Diamond Beach FAN – was completed seamlessly.

And the great news is, it was.

The cutover itself was simple enough, says Tyler.

“You disconnect each set of fibres in the NOW trailer and redirect them into the exchange. A few configuration updates and network health checks, and then you move onto the next device.

“It did get a bit more complicated, though, because we had to plan the individual cutover timings for each of the technologies housed in the FAN to make sure the entire cutover process went smoothly for our customers.” 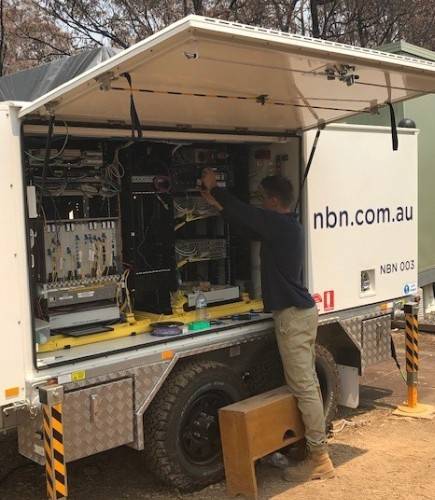 The cutover and COVID-19

On top of all this, the team working on the cutover also had to contend with the impacts of COVID-19.

Once people across the country began working and learning from home due to the spread of COVID-19, it was necessary to reduce service outages as much as possible.

So, nbn’s Operate & Maintain Network team implemented a number of planned outage embargoes to keep activity, like network changes and upgrades, to a minimum.

Yet, this presented a challenge to the Diamond Beach cutover.

“When we first connected services onto the NOW trailer back in November, it took about 10 hours and wasn’t smooth sailing,” says Tyler.

“Six months later, thanks to all our learnings, preparation and planning we were able to cut services back within a tight maintenance window.

“The maximum disruption to services as we performed the switch was a two-hour stretch between 3am and 5am. But the average interruption to customers was 60 minutes, which is a fantastic improvement.” 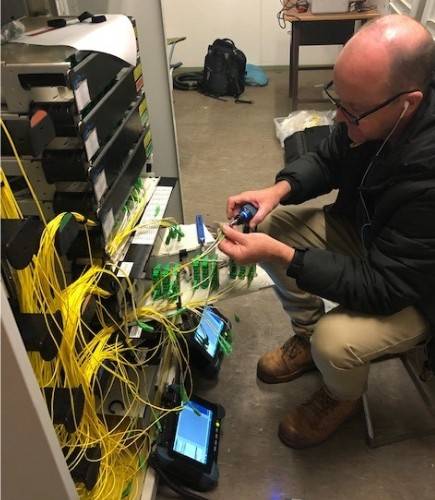 Now that the NOW trailer has been successfully deployed in the field for the first time, Tyler says the learnings from the experience will find even further value within the business.

“It’s given us the drive to continue designing solutions like the NOW, and to keep looking for more ways to continuously improve how we can support, maintain and operate the nbn™ network to keep our customers connected.

“This has been a fantastic learning experience and has set us up very well for similar extreme weather events, if and when they happen.”

Next: read about the wealth of connectivity in Broken Hill.