Rolling out across the country: boom-town Ballarat

The nbn™ project | Published on 10 January 2019
Share on Twitter Share on Facebook Share on LinkedIn
As we roll out the nbn™ broadband access network, we’re fortunate to explore the breathtaking locations that grace our wide and sunburnt land. This week we head to Ballarat, which is now ready for service, to find out what puts it #OnTheMap…

You’d be hard-pressed to find an Australian who hasn’t heard of Ballarat.

And while they may not know exactly where it’s located, or have yet to enjoy a visit, such is the city’s place in Australian folklore that its reputation and historic charm precedes it.

Yet long before the land became known around the world for its golden era, Ballarat served as a meeting place for its Traditional Custodians: 25 local Wathaurong communities.

Located 116 kilometres west of Melbourne in the foothills of the Great Dividing Range, it was at this location on Lake Wendouree that the Wathaurong people would gather to rest. And from their Wadawurrung language came its apt name, with “balla” and “arat” meaning “resting place”.

Today, Australia’s third-largest inland city is a lot less rest and a whole lot more bustle with some 157,485 people calling it home. 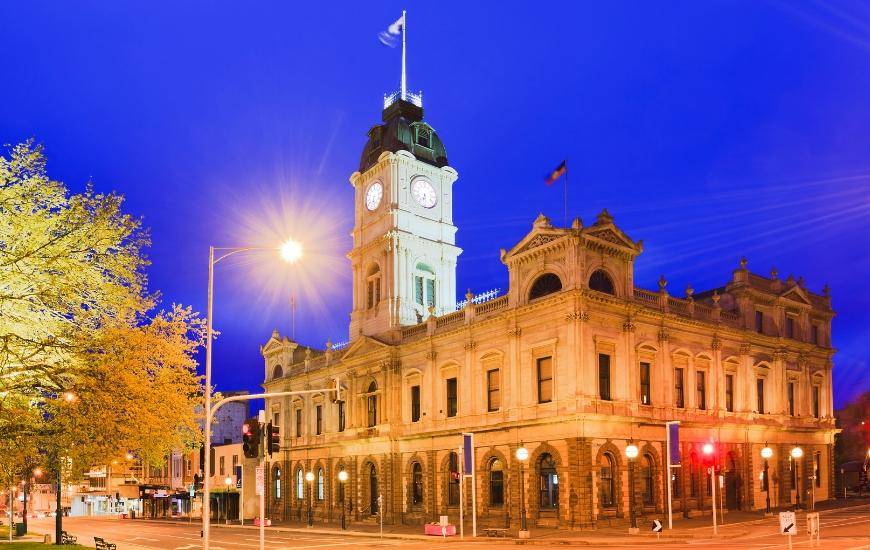 Ballarat is now ready for service on the nbn™ broadband access network, helping to bring connectivity and access to fast broadband to the local people, business owners and visiting tourists of the region.*

Research from Connecting Australia, AlphaBeta’s first national economic and social study into the impact of the nbn™ access network (commissioned by NBN Co), suggests regional Australians – like those living and working in Ballarat – are happily benefiting from connectivity. These connectivity benefits include helping to prevent social isolation, helping inspire entrepreneurship (especially among women) and helping to improve education.

The research estimates up to 19,470 additional businesses in Victoria will be formed with the help of access to services over the nbn™ access network by 2021.

Says Ebony Aitken, Head of nbn™ local for Victoria and Tasmania, “Late last year, the final suburbs of Alfredton, Delacombe and Redan switched on, meaning that more than 53,000 local homes and businesses across the city can now access services over the nbn™ access network. It’s great news for the community with construction of the network now complete throughout the City of Ballarat.” 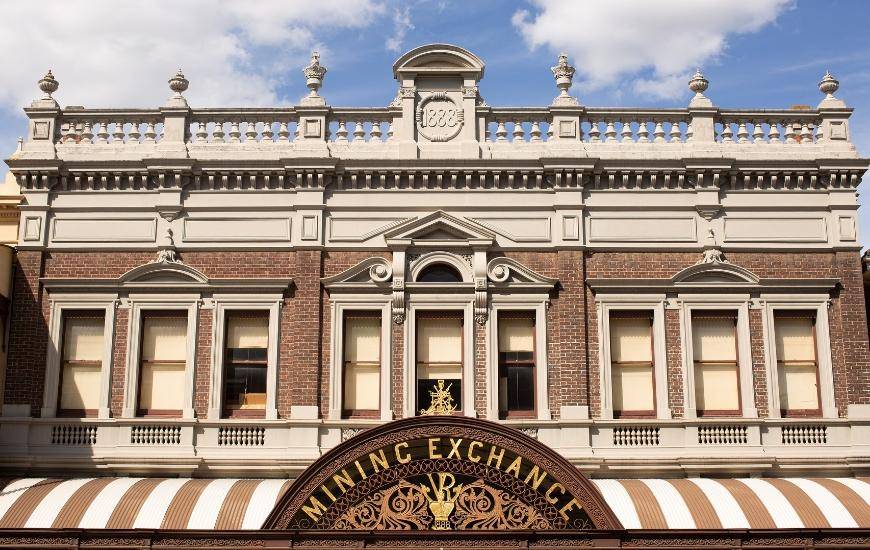 It was Thomas Hiscock who, in August 1851, first struck gold in Ballarat; and word spread quickly. The resulting gold rush would see Ballarat officially become a town in 1852, and it would enter into Australian folklore on 3 December 1854.

That was the date of the Eureka Stockade: Australia’s most famous rebellion.

It was a mighty clash between government forces and miners who were sick of being the subject of police brutality and unfair mine licensing fees, alongside a lack of voting rights and council representation. Named for the quickly constructed fortifications made by the miners on the Eureka goldfields, some 30 people tragically lost their lives during the conflict, and the Stockade has been the subject of many films.

Needless to say, it’s these gritty gold-driven origins that give Ballarat its iconic place in Aussie history, and it’s what romances many a tourist.

Making the most of Ballarat 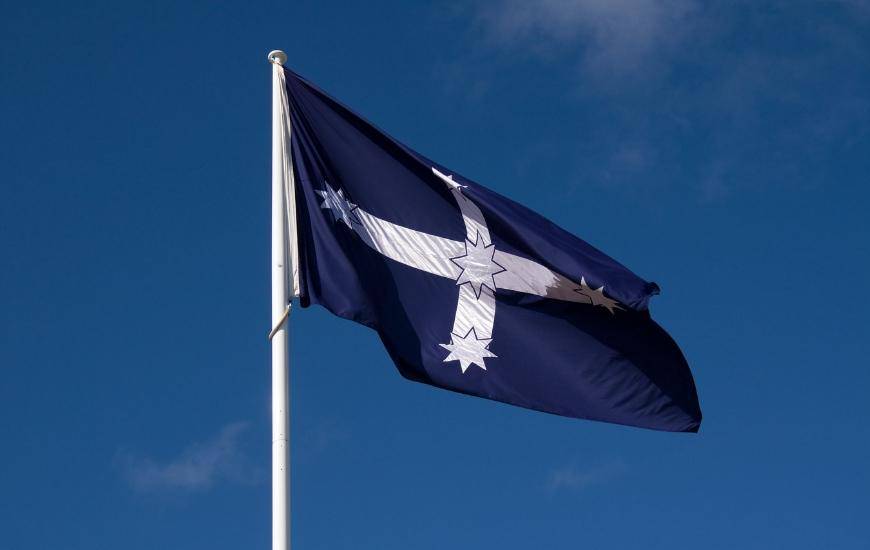 For those keen on that gold-rush history, you can go to the exact spot where the Eureka Stockade took place.

The Eureka Centre (formerly the Museum of Australian Democracy at Eureka) sits there and is also known as the Home of the Eureka Flag. It’s a high-tech, interactive experience, with the museum itself surrounded by parkland.

Also not to be missed is the Gold Museum, which gives a glittering insight into the way the original town’s settlers lived and worked the goldfields. You can also gawk at replicas of the region’s famed nuggets, including the very impressive ‘Welcome Nugget’. Discovered in 1858, it weighed a whopping 69 kilograms and was the biggest lump of gold ever found at the time.

Once you’ve taken in the museums, it’s worth exploring the city itself and putting faces, so to speak, to the locations and places from Ballarat’s history. The Ballarat Heritage Tours are a great way to see and learn about the city’s oldest locations and the role they played in its history.

Those looking for some culture can head to the Art Gallery of Ballarat, the oldest of its kind in regional Australia, which was founded in 1884. Or for something different, there are ghost tours to give you a peek into spooky back alleys, a ‘lunatic asylum’ that opened in 1867, and the Ballarat Old Cemetery, which opened in 1856 and houses the remains of more than 35,000 people.

A great place for families 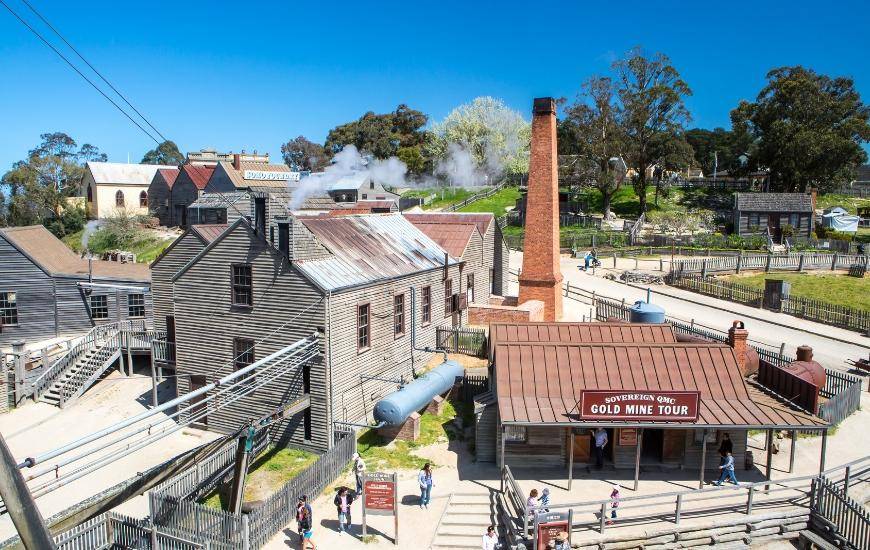 Ballarat may have a bloody and industrial history but, as a place to visit with kids, there’s a lot to see and do. The fun starts at Sovereign Hill. This open-air museum is a recreation of 1850s-era Ballarat and is built on some of the original goldfields.

It’s been created with fine attention to detail, and while exploring the wooden structures, tents, horse-drawn carts and old-time stores is all part of the fun, it’s getting into the river and panning for gold that’s perhaps most memorable. Guides show you just how to work the sand and, yes, people do occasionally find something golden!

Equally as big and fun for the kids – if perhaps not as relevant to the city’s history – is Kryal Castle. Like going back in time, this medieval theme park comes complete with archery, jousting, blacksmiths, knights, magicians, princesses and more, all placed within a spectacular castle frontage. 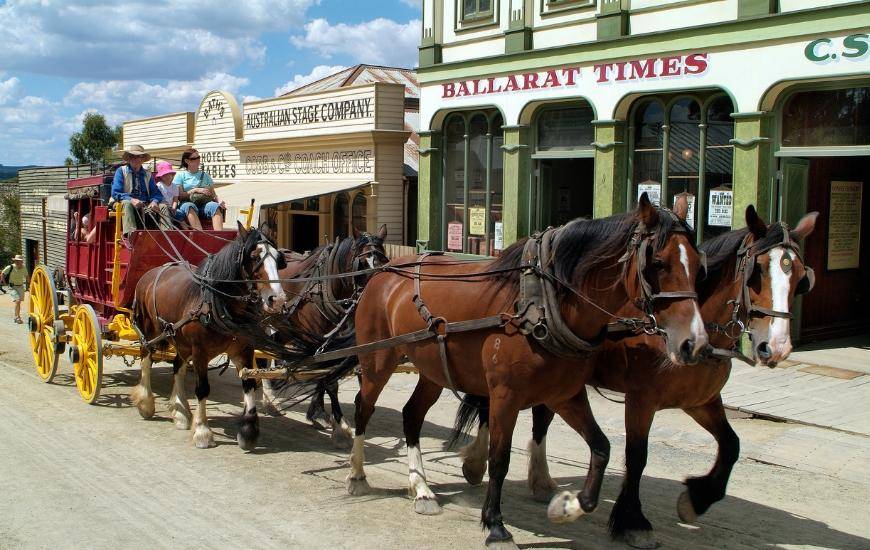 There’s also no shortage of natural wonders to greet visitors to Ballarat. Lake Wendouree is always magical but even more so in autumn when the leaves change colour.

Blessed with abundant birdlife and a botanical garden, there are placards along the lakeside walk that fill you in on more of the city’s history. You’ll come across statues, a poet’s cottage, a tram museum, a stunning memorial to Australia’s prisoners of war, playgrounds and more.

And if all that isn’t enough, Ballarat also has its own wildlife park where you can get up close and personal with some gorgeous animals. 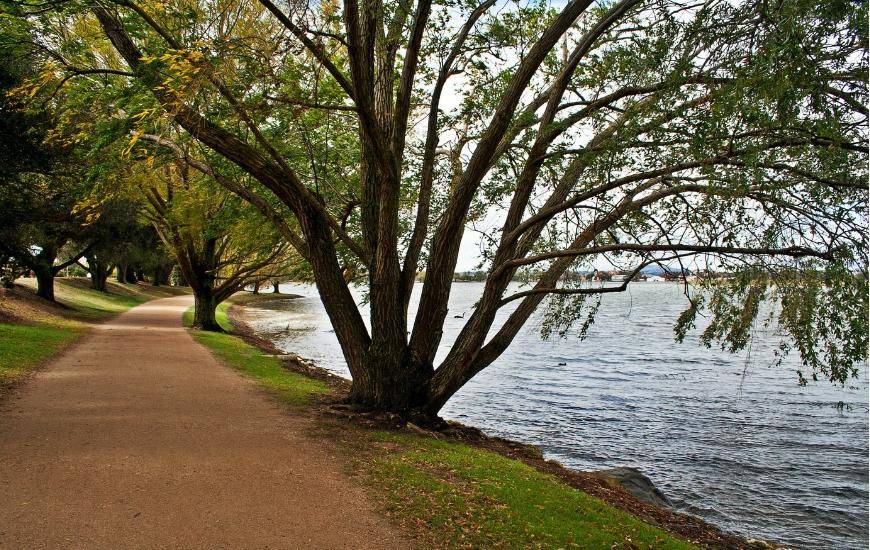 With the Connecting Australia report indicating the extensive benefits that access to fast broadband is helping to bring to regional Australia, there’s a new kind of ‘gold’ to be found. While Ballarat may be old in terms of its history, it’s anything but when it comes to connectivity.
Check your address to see when you can switch.
Address
Enter an address and select from the dropdown options

Ballarat by the numbers

3 – Ballarat’s ranking in terms of Victoria’s largest cities.
25 – The number of Aboriginal communities that called the Ballarat area home.
30+ – The number of fatalities at the Eureka Stockade.
69 – The weight (in kilograms) of the biggest gold nugget found in Ballarat.
1837 – The year Archibald Yuille first settled in the area with his sheep farm.
1907 – The year the first film about the Eureka Stockade was released.
157,485 – The population of the Ballarat area (as of the 2016 Census).
21,000,000 – The weight (in ounces) of gold mined in Ballarat between 1851 and the final mine’s closure in 1918.

Discover what puts Byron Bay on the map.
*An end user’s experience, including the speeds actually achieved over the nbn™ broadband access network, depends on the nbn™ access network technology and configuration over which services are delivered to their premises, whether they are using the internet during the busy period (7pm to 11pm), and some factors outside of NBN Co’s control (like their equipment quality, software, chosen broadband plan, signal reception, or how their provider designs its network). Speeds may also be impacted by network congestion on Fixed Wireless connections to the nbn™ access network, including during busy periods. Sky Muster™ satellite end users may also experience latency.