By: Jennifer Kiely | The nbn™ project | Published on 4 September 2019
Share on Twitter Share on Facebook Share on LinkedIn
With 150 or so ‘Big Things’ dotted around Australia, we shine a (tall) spotlight on those looming large in nbn™ ready-to-connect towns, suburbs and cities.
Here in Australia, big things are kind of a big deal.

For starters, the country itself is big. The sixth largest in the world by land mass behind Russia, Canada, China, the United States of America and Brazil, at 7,692,024 square kilometres, Australia is also the planet’s biggest island. 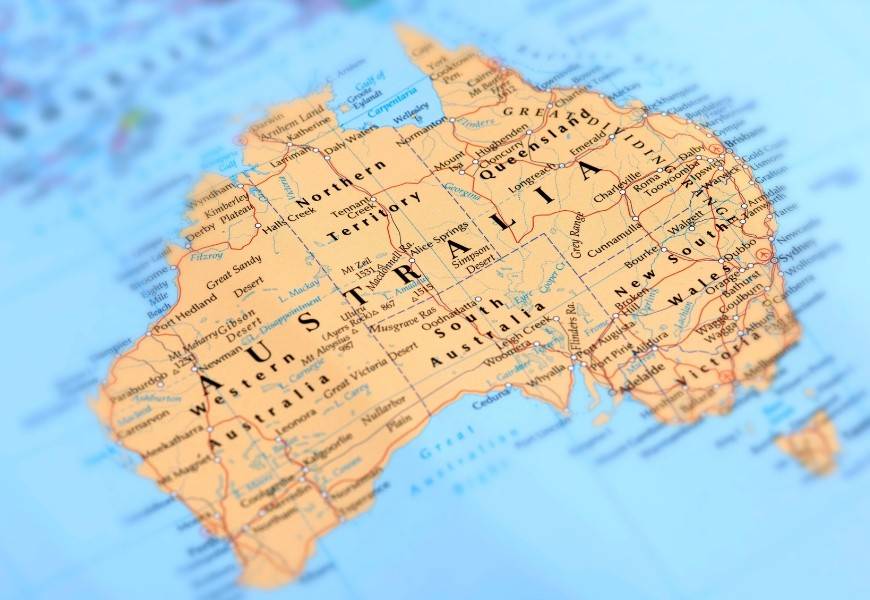 We’ve also got the world’s largest coral reef, the Great Barrier Reef, that hugs Queensland’s coastline; the world’s largest monolith, Uluru, in the Northern Territory’s Uluru–Kata Tjuta National Park; and, of course, we’re undertaking one of Australia’s biggest ever infrastructure projects in rolling out the nbn™ broadband access network.

Today, more than 10 million premises across Australia are ready to connect to the nbn™ access network, with the company on track to complete the network build by June 2020. 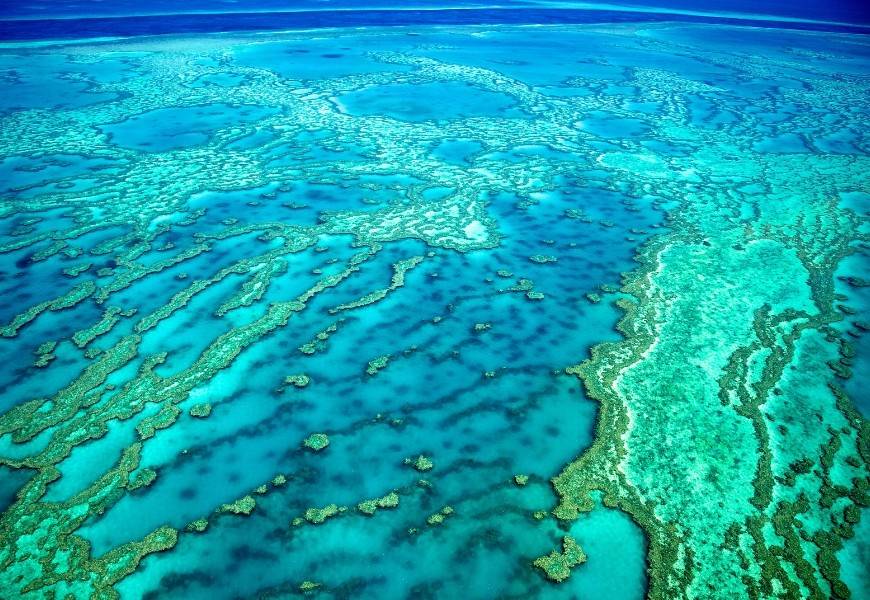 Yet, these are not Australia’s only ‘big’ claims to fame…

For some reason, Aussies like to make their literal mark in a BIG way. That is, with Big Things.

And by ‘Big Things’, we mean oversized, generally roadside, photo-worthy (in most cases) sculptures.

If you’ve ever taken a road trip Down Under, then you’ll probably know what we’re talking about. 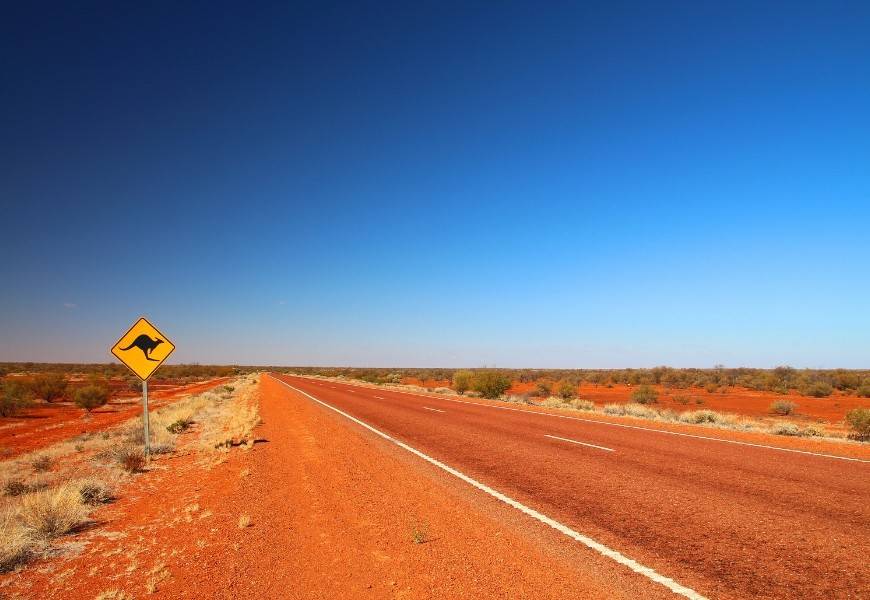 Whether it’s promoting a business (current or long-since gone), recognising what a town is known for, or ‘just because’, ‘Big Things’ are peppered right across the land.

According to Wikipedia, 150 or so ‘Big Things’ call Australia home, covering all states and territories (just like our network!)

So, in this B-I-G new blog series, we discover some of Australia’s Big Things that can be found in nbn™ ready-to-connect towns, suburbs and cities… how many have you visited?

Home to some other larger-than-life natural and manmade structures (think Mount Kosciusko, the Sydney Harbour Bridge and the Snowy Mountains Scheme), NSW is also the country’s most populous state.

Divided into “four distinct geographical sections” – the Coast, the Mountains, the Central Plains and the Western Plains – more than three million homes and businesses are now ready to connect to the nbn™ access network*.

Ready to hit the road?

The first stop on our (virtual) Big Road Trip around Australia to towns connected to the nbn™ access network is crooner country, Tamworth.

Pulling out onto the open road from NBN Co HQ in North Sydney, we make our way north for more than five hours and 400 kilometres.

And there she is, The Big Golden Guitar.

Located at 2 Ringers Rd, The Big Golden Guitar is a replica of the trophies awarded at the annual Golden Guitar Awards, part of the Tamworth Country Music Festival.

Unveiled by Australian country music royalty Slim Dusty AO MBE in 1988, The Big Golden Guitar is made from fibreglass over a steel frame, standing 12 metres high and weighing half a ton.

Home to more than 62,000 people, Tamworth is located on the banks of the Peel River and, says NBN Co’s Kate Woodbridge, has plenty to offer locals and visitors alike.

“Tamworth is so much more than the home of country music,” says Woodbridge, nbn™ local Manager for Central and West NSW.

“The Tamworth Sports Dome regularly has netball and basketball events, and is just a short walk to the hockey complex.

“Country football is alive and well with league, union and AFL teams battling it out to be at the top of the table in the region each weekend." 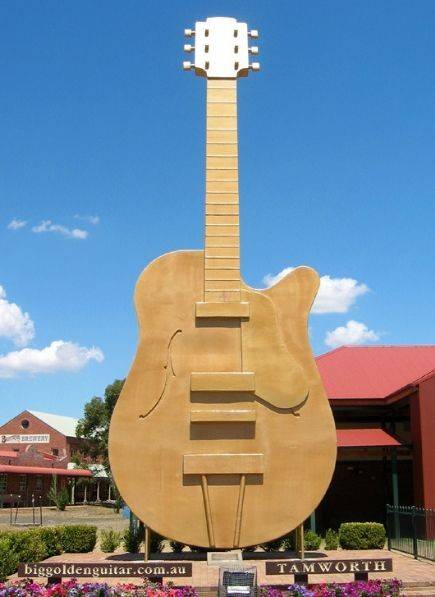 So the locals love their music and sport, but how have they taken to services over the nbn™ access network?

“The Tamworth community has harnessed the possibilities on the nbn™ access network, using it to showcase the town’s amazing facilities to the rest of Australia, which regularly attracts huge events and conferences.”

Tamworth is ready to connect to the nbn™ access network. Check your address to find out if it’s available at your home or business.
Address
Enter an address and select from the dropdown options

View results
Waving goodbye to Tamworth in the rear vision mirror, it’s time to venture 24km northeast along the New England Highway… to check out The Big Chook in Moonbi.

Home to 361 residents – plus one big chicken! – the nbn™ ready-to-connect town rests at the base of the Moonbi Range, the starting point of the Northern Tableland section of the Great Dividing Range.

To spy the big bock-bock-bekerk, head to 3 Park Avenue.

According to Atlas Obscura, the far-from-paltry poultry is made from fibreglass and pays tribute to the area’s chicken farming industry.

“Moonbi is a great example of a thriving agricultural community using the Fixed Wireless network to ensure its successful poultry farmers stay at the forefront of their industry,” says NBN Co’s Woodbridge.

“It also allows many other local businesses to deliver quality services to the local residents, as well as the many visitors coming to town to get a selfie with The Big Chook and to experience some country hospitality.”

And there’s plenty of that hospitality to be found at the Moonbi Museum.

Just a hop, skip and a jump from The Big Chook, the museum is another nod to the region’s local history and people, with its exhibits ranging from the time of settlement in 1856 right through to the present day. 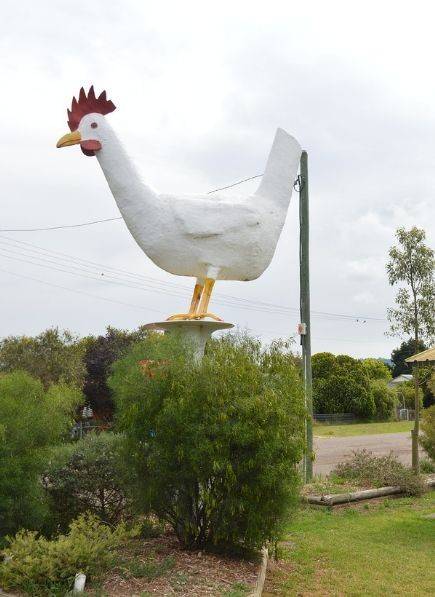 Photo: Mattinbgn (talk · contribs) [CC BY 3.0], via Wikimedia Commons
While you’re in town, you might also like to take in the sweeping views from Moonbi Lookout and experience the optical illusion of Gravity Hill where water appears to go up hill! 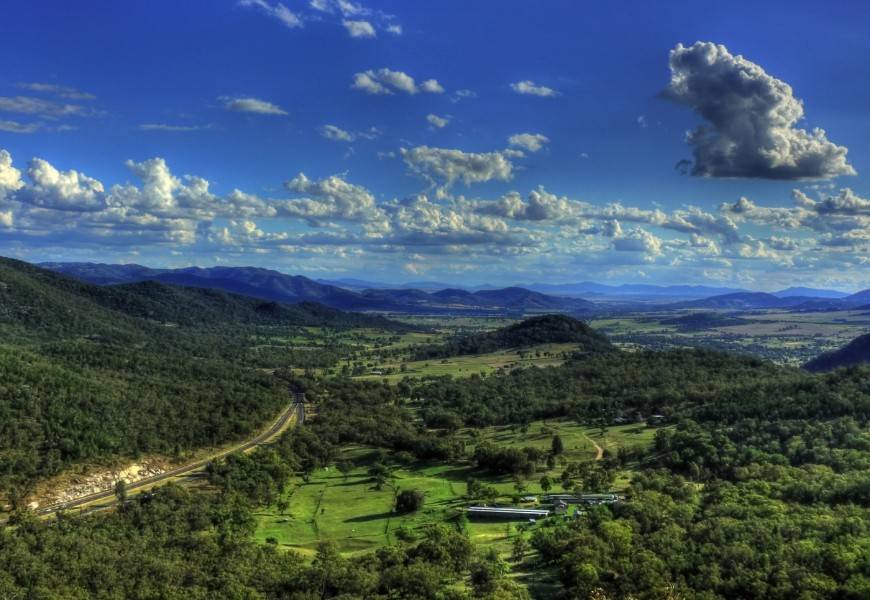 The view from Moonbi Lookout.
Moonbi is ready to connect to the nbn™ access network. Check your address to find out if it’s available at your home or business.

Buckle up and settle in for the next leg of the journey: a seven-or-so-hour drive southwest to the town of Barellan.

How do we know when we’ve arrived? When we spot The Big Tennis Racquet! 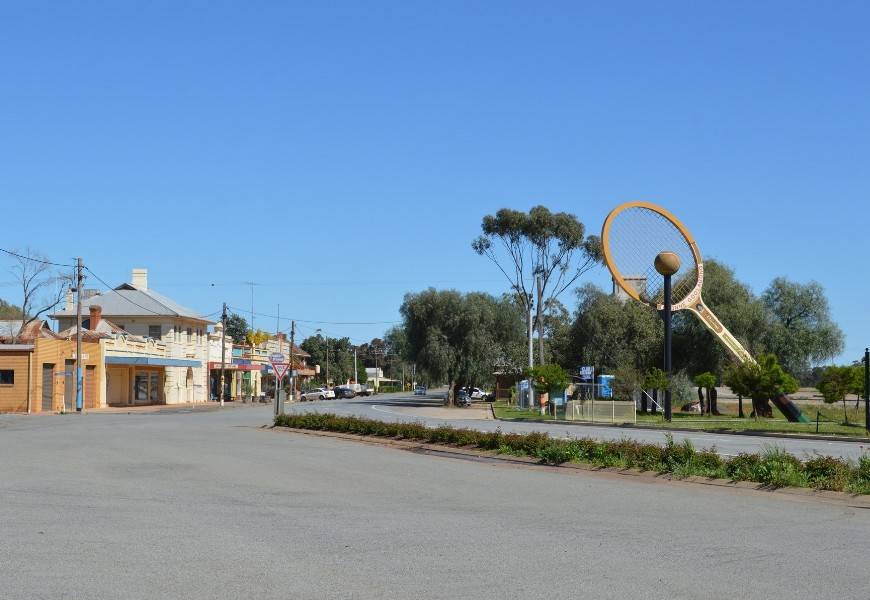 Located 521kms west of Sydney, Barellan is home to 538 residents and has long been a grain-growing district.

So why a big piece of sporting equipment and not, perhaps, a big sheaf of wheat?

Because it’s a tribute to one of Australia’s biggest names in tennis – and the town’s world-famous daughter – Evonne Goolagong-Cawley AC MBE, who grew up and learned to play tennis in Barellan.

Said to cost $45,000, The Big Tennis Racquet is a 20:1 scale replica of the two-time Wimbledon champ’s wooden Dunlop racquet.

That’s not to say Barellan doesn’t make a big thing of its grains, though – it also boasts a community-owned brew, Barellan Beer.

Made from locally-grown barley, the Golden Grain Beer is available on tap in two of the town’s watering holes – the War Memorial Club and the Commercial Hotel – with all profits going directly back into the community.

Says Lachlan Ceeney, nbn™ local Manager for NSW South and ACT, “Barellan is a cracking little town in the Riverina, the heart of regional New South Wales, which is well-known for its agriculture.

"Since 2015, NBN Co has been providing connectivity and access to more than 300 Barellan homes and businesses. It’s pleasing to see strong take up of the service, which is contributing to the growth of the economy in the region.”

Also well worth a look in town is the Country Women’s Association Rest House. One of the first of its kind, the house dates back to 1924 and was purpose-built by local women as a ‘home away from home’.

The ninth CWA branch to be formed in NSW, over the years, the house has also played host to many other local organisations including the Golf Club, Red Cross and the Show society. 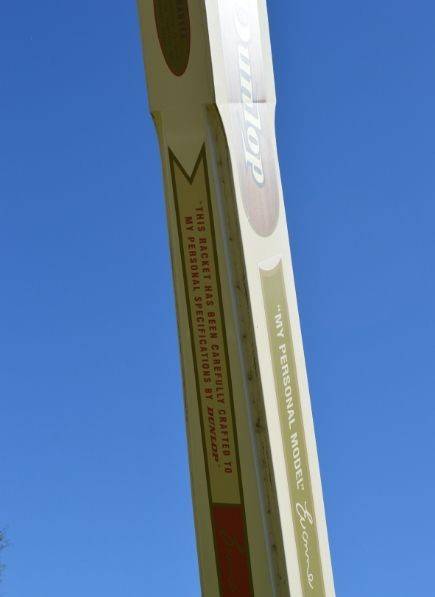 Speaking of days gone by, why not make a weekend of it at the Good Old Days Weekend?

Barellan is ready to connect to the nbn™ access network. Check your address to find out if it’s available at your home or business.
Address
Enter an address and select from the dropdown options

And for the last leg of today’s trip, we’ve gone fishin’…

Casting our line 360km to the southeast, we arrive at The Big Trout in Adaminaby.

At 10 metres tall and tipping the scales at a whopping 2.5 tonnes, there’s no need to throw back the world’s biggest trout.

Making a splash at Adaminaby’s Picnic Park in Denison Street, it took four years for sculptor – and keen angler – Andy Lomnici to make from fibreglass before its unveiling in 1973.

A popular spot for outdoor adventures, Adaminaby is home to 301 residents and is located 50km northwest of Cooma in the picturesque Snowy Mountains.

Sitting at 1000 metres above sea-level, the original town was relocated 9km before the Eucumbene River was dammed in 1958. Part of the Snowy Mountains Scheme, this formed Lake Eucumbene, the scheme’s central storage area.

Says Lachlan Ceeney, nbn™ local Manager for NSW South and ACT, “Digital connectivity is more important than ever and that’s what the nbn™ access network has brought to Adaminaby.

“Local residents and businesses can now connect to our Fixed Wireless service providing them with increased access to the digital economy.”

Looking for more ways to while away your time in Adaminaby? 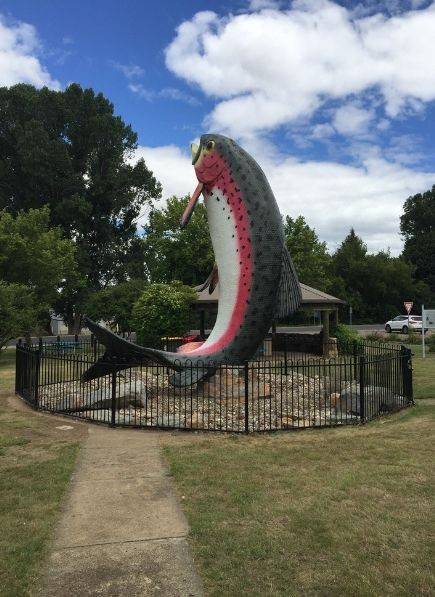 Photo: Mattinbgn [CC BY-SA 3.0], via Wikimedia Commons
Catch the Snowy Mountains Trout Festival for its 46th outing or learn all about the Snowy Mountain Scheme, “one of the seven engineering wonders of the world” made possible by 100,000 determined workers, at the Snowy Scheme Museum.
Adaminaby is ready to connect to the nbn™ access network. Check your address to find out if it’s available at your home or business.
Address
Enter an address and select from the dropdown options

The next big contenders?

Could these official NSW state emblems be contenders for future Big Things? We’d sure pull over to see and snap a selfie with…

May we suggest some of these nbn™-ready-to-connect locations for Fred and friends: Cooma, Byron Bay, Morisset, The Entrance, Queanbeyan, Campbelltown, Corrimal and Morpeth.

Happy Hump Day!
The largest population of wild camels in the world. 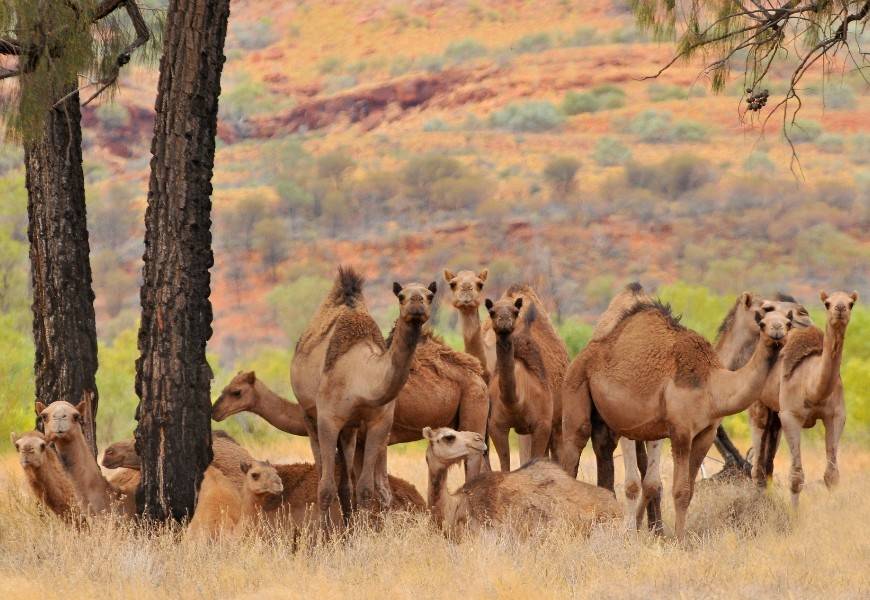 A caravan of camels in outback Australia.
Islands in the sand
Stunning Fraser Island is the world’s largest sand island. 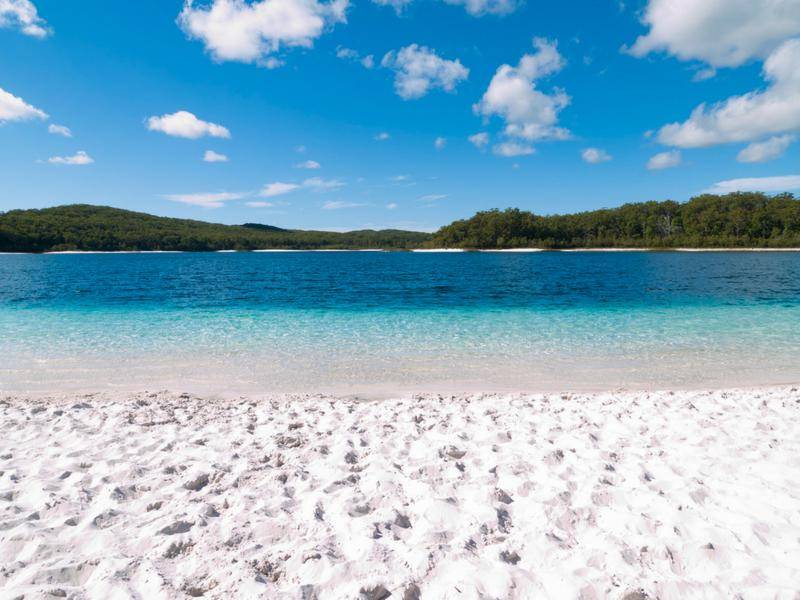 Lake McKenzie, Fraser Island
What a gem
The world’s biggest producer of diamonds and opals. 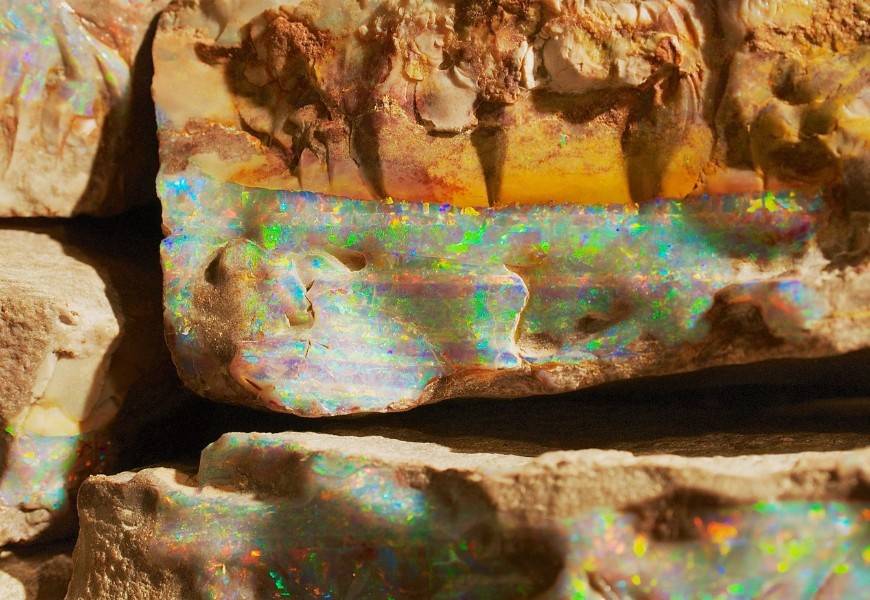 Boulder opal from Coober Pedy, South Australia.
Next up, we head way out west for the second leg of our ‘Big Things’ road trip.
*Weekly Progress Report, as of Thursday 22 August 2019.